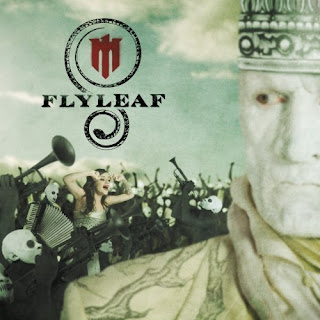 I was excited when my children downloaded the CD Memento Mori by Flyleaf from the iTunes Store. Flyleaf takes modern Christian rock music to an entirely new level.

Let me start out by saying that Memento Mori isn’t for everyone, but it should be.

The incredibly powerful rhythms, vocals and overall message invoke a forceful and violent response to the chaos that is infecting today’s Church from within. The dark imagery (especially in the booklet) conveys the feeling of despair and hopelessness that only Jesus Christ could shine a light through.

What I like most about Memento Mori is the hard hitting message of the purpose of the Church on this earth and the all consuming love of Jesus Christ.

Memento Mori may be alternative in its sound (until the Church fully embraces rock driven worship) but it is entirely Biblical in its message.

It is really hard to pick a favorite. Each song has a uniqueness that brings to life so many different topics. “Again” has to be my most favorite song because it touched a nerve.

There is so much that we as Christians would like to accomplish. The enormity of it can become overwhelming sometimes leading us into inaction. This song reminds us, through God’s voice that it’s only when we are on our knees in communion with Him are we going to see this world transformed for Jesus Christ. There is no other way!

A journal entry from the Commander taken from the CD Cover (PDF):

As I looked over the Battlefield today, I was reminded of what we were fighting for…I started thinking about my daughter…the way her heart breaks with every injustice. She prays like everything depends on God, but then lives like it all depends on her. Even though she’s strong, there are times when she tries to carry all the weight of the world on her own and ends up crushed, brought to her knees.

The song details the struggle of many Christians who are looking to make an impact on their society, but finds themselves caught between the cares of this world and the business of the kingdom. This is a beautiful love song between Jesus and his follower.

The CD Booklet (in my case, the Digital Booklet) is a companion to the CD more than a mere display of lyrics (there are no lyrics in the booklet). Instead, we are taken along an exciting and revealing story, in a world which is accented by the expressive music we hear. Through journal entries passed down from a person referred to as Commander, we see into the battlefield of earth.

How Biblically grounded are the lyrics?

Each song captures a biblical principle and modernizes it to the understanding of a new generation. Jesus is the central focus of Memento Mori, his effect on those in hell, those bound for heaven or those engaged in a win or lose battle on earth.

I find the attitude of Memento Mori inspiring. An attitude of overcoming hurt and pain, disgrace and shame. An attitude that sees Christ in his glory and realizes that we are but ants in his sight. The majesty of Christ is far greater than any problems or situations we may encounter. A perspective that the battle is real.
Sample Song focus—

Again—Christ’s overreaching love and compassion for his children

Beautiful Bride—A description of the Body of Christ, the Bride, the Church.

Treasure—The refining nature of Christ on a believer

Circle—Christ’s sacrifice for the sinner

The preceding review was first published on http://kingdomrepresent.com